This study considers these disparities. The mapping on GIS of the evolution of the railroad network is based on the actual railroad network of North America.[3]  For the purpose of visual simplicity, the GIS study has filtered all the railroads that do not belong to the area. This study then includes only those railroad lines that ran within the old political boundaries established in 1881, in the case of Manitoba, and 1882 when the North-West Territories became three distinct regions:  District of Saskatchewan, the District of Assiniboia and the District of Alberta.[4]Similarly, topographic information displayed in maps and representations include only principal rivers within the old boundary. To represent the evolution of the network over time, the database incorporated a “YEAR” column into the GIS project to reflect the year a line extension became operative according to the Report of the Postmaster General (RPGC). [5]

While highly detailed, the layout of maps on GIS confronts technological constraints, mainly coming from the transformation of a nineteenth-century paper map into a geo-referenced digital version. The plot of rail tracks on paper maps was represented with solid, thick lines and did not reflect any scale or proportion. Therefore, the comparison of the railroad lines from paper maps of different visual quality and the digital version of the actual track suffers from certain imprecisions due to scale problems, geo-referencing stretching and coordinate systems.[6] Taking into account these glitches and once compared with maps of the time, the railroad lines overall did not experience substantial changes. 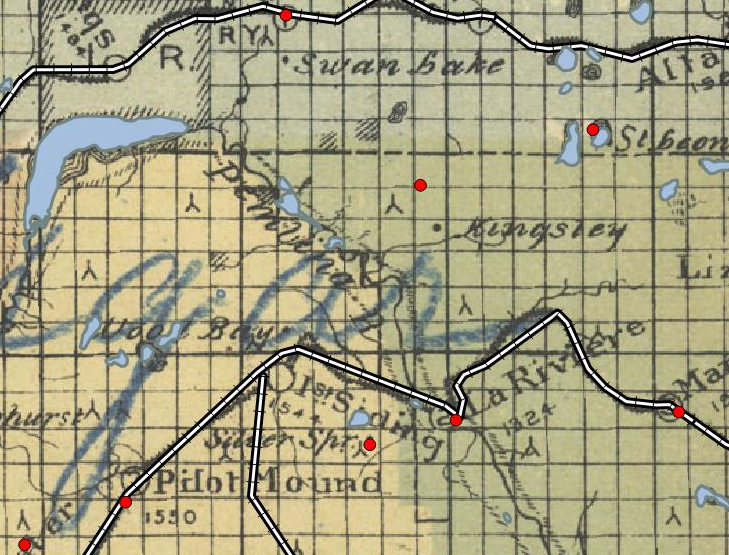 The maps on GIS reflect the evolution of the network year by year as it appeared in the RPGC enhanced with the incorporation of missed information extracted from digitized and geo-referenced maps. In this way, quality control was performed with different sets of data; the one extracted from the textual records and with data from digitized and georeferenced maps. As it happened with other assessment of data quality, visual data and representation are as accurate as possible.

Base GIS shapefiles of Canada and the provinces come from different sources but mainly the dataset of Western Canada townships distribution comes from CCRI and Atlas Canada.[8] Additional data incorporated into GIS tables were extracted from Historical Statistics of Canada and Canada Year Book.[9] Certainly, data collected for this study face some restrictions as they are based on a limited number of published records, mainly due to time constrains; nevertheless, the use is valid as no other source based on post offices and railroad development in Western Canada has been published at the present.

[2] Alan Artibise has explained the “booster” spirit and the idea of selling Winnipeg to potential investors and settlers. See Alan F. J Artibise, “Advertising Winnipeg: The Campaign For Immigrants and Industry, 1874-1914,” MHS Transactions, 3, no. 27 (71 1970), http://www.mhs.mb.ca/docs/transactions/3/advertisingwinnipeg.shtml and on the Prairies in general, Alan F. J Artibise, “Boosterism and the Development of Prairie Cities, 1871-1913” in R. Douglas Francis and Howard Palmer, The Prairie West: Historical Readings (University of Alberta, 1992), 515–543; James Belich, Replenishing the Earth: The Settler Revolution and the Rise of the Angloworld(Oxford: Oxford University Press, 2009), 70-72.

[4] Saskatchewan and Alberta became provinces in 1905. Manitoba changed its area in 1881 and obtained its actual size in 1912.

[6] This is a common problem for every researcher. See for instance Jeremy Atack, “On the Use of Geographic Information Systems in Economic History: The American Transportation Revolution Revisited,” The Journal of Economic History 73, no. 02 (May 23, 2013): 313–38, doi:10.1017/S0022050713000284. A similar issue was raised in William G. Thomas, “Map Inaccuracies in Railroad Sources,” Railroads and the Making of Modern America, 2011, http://railroads.unl.edu/views/item/mapping?p=4.

[7] Excerpt from Bulman Bros. and Co, “Map of Manitoba Published by Authority of the Provincial Government” (Winnipeg: Manitoba Department of Agriculture and Immigration, 1897), University of Manitoba: Archives and Special Collections.